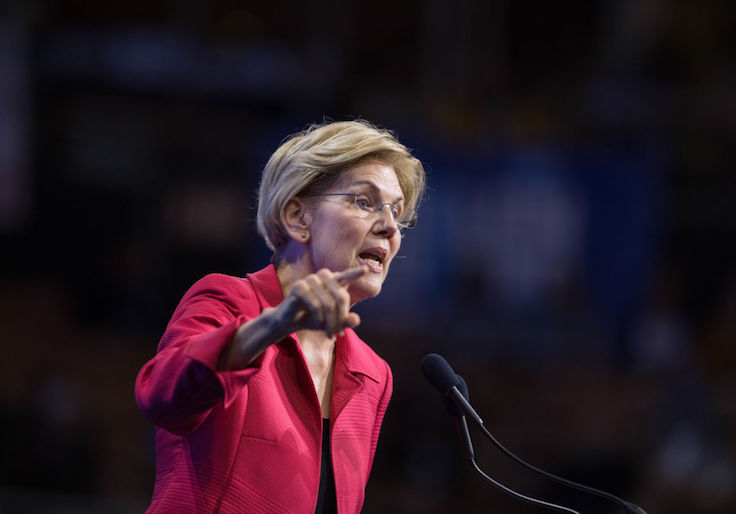 Both of the incumbents targeted by Warren’s endorsement quickly fired back at the Massachusetts senator, labeling her a radical aligned with “outside special interests” looking to “take away local jobs.” Cisneros and Newman are supported by Justice Democrats, the same progressive group that backed Reps. Alexandria Ocasio-Cortez (D., N.Y.) and Ilhan Omar (D., Minn.) in 2018.

Warren’s endorsement of Newman puts her at odds with the Democratic Congressional Campaign Committee (DCCC), which is supporting Lipinski in his reelection bid. The DCCC initially refused to endorse Lipinski but reversed course after criticism from moderate Democrats. House Speaker Nancy Pelosi has also endorsed Lipinski in the past.

“At a time when women’s reproductive rights are under attack daily from Republican lawmakers across America, Illinoisans deserve a leader with an unwavering commitment to fighting for women’s access to reproductive health care,” Warren said in a statement.

“Warren has moved from independent fact-based thinking to ideological orthodoxy,” Lipinski said. He added that Newman “has only parroted the talking points of radicals who would take away everyone’s private health care, eliminate Medicare, and raise the taxes of hard working middle-class families by tens of thousands of dollars.”

“We told you the outside special interests were coming to take away local jobs,” said Cuellar. “Elizabeth Warren and our opponent share an agenda that would kill over 108,000 jobs in our region.”

Warren cited the “unapologetic” progressive values of Cuellar’s opponent, Jessica Cisneros, in a statement detailing her endorsement. Cisneros has aligned her campaign with the same liberal policies present in Warren’s presidential bid, including Medicare for All, the Green New Deal, and a $15 minimum wage.

Warren’s endorsements reflect internal party divisions as progressive liberals battle against moderate Democrats in conservative-leaning districts. Some party leaders, including former president Barack Obama, have expressed concern over the infighting and its ability to weaken the American left.

“One of the things I do worry about sometimes among progressives in the United States… is a certain kind of rigidity where we say, ‘Uh, I’m sorry, this is how it’s going to be,'” Obama said in April. “And then we start sometimes creating what’s called a ‘circular firing squad,’ where you start shooting at your allies because one of them has strayed from purity on the issues.”